The London production of Groundhog Day premiered at The Old Vic on 16 July 2016 for previews, before officially premiering on 16 August 2016, running until 17 September 2016.

Groundhog Day is the story of Phil Connors (Andy Karl), a cynical Pittsburgh TV weatherman who is sent to cover the annual Groundhog Day event in the isolated small town of Punxsutawney, Pennsylvania, when he finds himself caught in a time loop, forced to repeat the same day again and again…and again. As each day plays out exactly the same as before Phil becomes increasingly despondent, but is there a lesson to be learnt through his experiences, will he ever unlock the secret and break the cycle?[1] 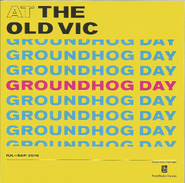 Phil Connors downstage of the rest of the cast.

Phil Connors downstage of the rest of the cast.

Phil Connors in his room.

Phil and Rita sitting in the snow.

Phil and Rita sitting on the former's bed.

Gus, Ralph and Phil at the Burrow Bar.

Phil Connors having a fantasy on his bed.

Doris freaks out, with the company behind her.

Phil and Rita in a diner.

Phil being crowded by other characters.

Three of the healers that attempt to help Phil.

Phil and Rita looking over Punxsutawney.
Add a photo to this gallery

Retrieved from "https://groundhogday.fandom.com/wiki/London_production?oldid=642"
Community content is available under CC-BY-SA unless otherwise noted.